We would like to remember the first TRIPLE International Conference and look back the many contributions from speakers, panelists and moderators and the lively discussions with the audience. Read the full report here:

What role do the social sciences and humanities (SSH) play in the discussion about open research in Europe? Which considerations do we take into account when choosing business models for open science projects? Can a hackathon help answer SSH-specific questions (such as the challenges in creating a multilingual vocabulary for a discovery service)? Does crowdfunding work in SSH projects? How does the GoTriple discovery platform fit into the ecosystem of the European Open Science Cloud (EOSC)?

These are just some of the questions addressed during the 1st TRIPLE International Conference “Empowering Discovery in Open Social Sciences and Humanities” hosted online by the Institute of Literary Research of the Polish Academy of Sciences (IBL PAN) on 22–24 November 2021. The event also provided a unique opportunity to launch the beta version of the GoTriple platform and to discuss its functionalities with the SSH community.

We thank over 140 participants – researchers, university and library staff, publishers, science journalists, SMEs, public authorities and policy makers – for joining us! Throughout the conference, the TRIPLE Twitter account was on fire: Tweets reached an audience of over 10,000 people! It shows that the TRIPLE project addresses some hot topics within the social sciences and humanities.

The conference was opened by an introduction to the goals and vision of the OPERAS Research Infrastructure. Maciej Maryl and Marta Błaszczyńska (IBL PAN/OPERAS-PL, Poland) and Larissa Saar and Pattrick Piel (Max Weber Stiftung/OPERAS-GER, Germany) then presented the newly launched national nodes. The national initiatives will share information about recent developments in the OPERAS Research Infrastructure with local stakeholders and SSH communities.

One of the key topics of Sabina Leonelli’s (University of Exeter) keynote speech were ethical issues surrounding open research data. Although she started off from the COVID pandemic and the implications for sharing large medical datasets containing vulnerable data, her major concerns are also valid for SSH research: Is it ethical to collect data from vulnerable populations and communities and use them for the benefit of other, mostly privileged societies? How to create and implement a global standard for collecting, storing and sharing highly relevant data so that they can be reused by researchers from many different disciplinary backgrounds and research organisations? How to convince SSH communities to participate in a global network of researchers sharing their datasets in accordance with the FAIR Guiding Principles for scientific data management and stewardship?

The next session, moderated by Emilie Blotière (Huma-Num, France), was devoted to the GoTriple platform, developed by the TRIPLE project. In short demos, TRIPLE partners showcased basic functionalities, such as browsing and filtering the multilingual dataset of resources ingested from major European aggregators.

In the first Session of the next day of the conference, participants learned about the GoTriple hackathon, which had taken place on 8–10 and 15–16 November. The aim of this virtual event had been to assess and improve coverage of the Library of Congress Subject Headings (LCSH) in the GoTriple vocabulary by using existing subject headings systems that are already in use for the organisation of publications in social sciences and humanities (SSH) disciplines. Participants were software programmers and researchers with a dedicated interest in vocabularies, programming librarians, non-IT specialists and professionals managing repositories.

The organisers of the hackathon, Iraklis Katsaloulis (EKT, Greece) and Cezary Rosiński (IBL PAN, Poland), together with some of the hackathon participants from the Greek, Polish and Portuguese-German teams, presented the results of the event. They also addressed the main challenges of the hackathon format in the SSH community.

The participants’ discussion brought up a number of questions, such as: How can SSH research be made more “sexy”’ for a broader audience, or: Is it really necessary to make it more “sexy” in order to receive crowdfunding? – “No,” was Alizé Averasano’s answer, “the key to success is communication about your project”. Other questions were: How can we touch people’s emotions with often non-emotional research topics? What are the ways to learn new communication strategies for crowdfunding? The discussion was moderated by Stefano da Paoli and Paula Forbes from Abertay University (UK).

Day 3 of the TRIPLE International Conference offered two panel sessions. The first one, titled “Business & Open Science – Contrast or Complement?”, was moderated by Gert Breitfuss and Leonie Disch from Know-Center. The panelists presented and discussed different types of business models that work best for Open Science projects, with a focus on sustainability. Gert Breitfuss first presented the work around developing a business model for the GoTriple platform, which included an analysis of 26 existing platforms and services and their business models.

Next, Niels Stern talked about OAPEN, a foundation that operates the OAPEN Library and and the Directory of Open Access Books (DOAB), two platforms that provide open access to scholarly publications. Another platform, CORE, and the service’s sustainability paths, was presented by founder and Head Petr Knoth.

Vanessa Proudman, Director of SPARC Europe and representative of The Global Sustainability Coalition for Open Science Services (SCOSS), raised questions on ethical considerations regarding which aspects of a project could be offered as a paid service, and which user groups could be charged. For instance, CORE differentiates between those who plan to monetise data acquired from the CORE services and institutions or researchers who use data for non-commercial purposes. All panelists concluded that no matter what, long-term funding is critical to sustain the service after the conclusion of a project.

Final recommendations from the panel for projects developing services were:

The moderator posed several questions that the panelist then answered one by one, after shortly presenting their organisations’ relationship with the European Open Science Cloud (EOSC). One focus of the ensuing discussions were the existing and potential future connections between their infrastructures and services (e.g. the SSH Open Marketplace developed by the SSHOC project) and the GoTriple platform, and what is needed to intensify collaborative efforts towards a shared goal, i.e. to strengthen the SSH component in the EOSC.

Go to the event web page to find the complete programme and list of speakers, panelists and moderators.

Slides and recordings of the event will soon be available on Zenodo (OPERAS Community) and the TRIPLE YouTube channel.

The 3-day conference was the first international event of this kind in the TRIPLE project. The 2nd TRIPLE International Conference conference will be held in early 2023. Stay tuned!

Looking back at the 1st TRIPLE International Conference
Tagged on: Open Science

TRIPLE in a nutshell

At the heart of the TRIPLE project is the development of an innovative multilingual and multicultural discovery platform for the social sciences and humanities (SSH), called GoTriple. It will provide a single access point that allows you to explore, find, access and reuse materials such as literature, data, projects and researcher profiles at European scale.

The TRIPLE project is financed under the Horizon 2020 framework with approx. 5.6 million Euros for a duration of 42 months (2019–2023). It will be one of the dedicated services of OPERAS, the Research Infrastructure supporting open scholarly communication in the social sciences and humanities in the European Research Area.

TRIPLE consists of a consortium of 19 partners from 13 European countries and is coordinated from France by Huma-Num.

“TRIPLE: Behind the Scenes” series on the OPERAS blog 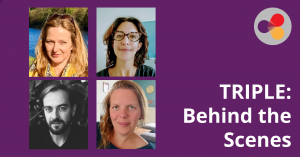 📣 Good news for everyone who needs a little more time to submit a glorious abstract about "Improving #Discovery and #Collaboration in ...#OpenScience". The deadline for the final TRIPLE conference has been postponed to Sunday, 4th December.
https://project.gotriple.eu/events/triple-international-conference-2023/

In the 3rd episode of the TRIPLE Video Tutorial series @GrayXVII and @aszen_one explain how to register at http://gotriple.eu, how to set up your ...profile and why it's worth the (tiny) effort.

Manage Cookie Consent
To provide the best experiences on the TRIPLE project website, we use technologies like cookies to store and/or access device information. Consenting to these technologies will allow us to process data such as browsing behaviour or unique IDs on this site. Not consenting or withdrawing consent, may adversely affect certain features and functions.
Manage options Manage services Manage vendors Read more about these purposes
View preferences
{title} {title} {title}